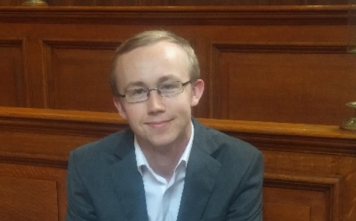 As you will no doubt have gathered, Reading Phoenix Choir were unable to perform their scheduled concert at Reading Town Hall last month, where we were due to announce the winner of the 2020 Walter Hussey Composition Competition. We are still planning to have some form of presentation to the winner plus a world premiere of the winning piece. However, this depends on when we are able to get back together in person for rehearsals and at the moment we don’t know when this will be.

In the meantime, we would like to continue introducing you to the finalists in the 2020 Walter Hussey Composition Competition.

Alex has performed recitals and played in concerts in venues across Scotland and the North of England, including Cartmel Priory, St John’s Kirk, Perth, and St Giles’ Cathedral, Edinburgh. He also performed the first movement of the Scriabin Piano Concerto in Perth Concert Hall, and is a member of the London-based Rodolfus Choir. As a composer, he won first prize in the Corpus Christi Cambridge Composition Competition at age 17, for a setting of O Sacrum Convivium. Although primarily a choral composer, he has also written a treble recorder sonata and a piano trio, which have been performed in Scotland and in Cambridge. With St Catharine’s, he is regularly involved with the well-renowned Girls’ Choir as an accompanist and director, and has also been involved recently in CD recordings and performances of works by contemporary female composers.

Alex is incredibly passionate about music from the Gaelic singing tradition, a style which is often echoed in his own writing. This is often fused with other more modern genres of music, such as Jazz and Neoclassicism, to create a new style of fusion.

‘I have really enjoyed writing this piece and taking part in this year’s competition. I aimed to partially keep the sound of Gaelic psalm chanting, whilst mixing that with more modern choral styles. It’s also been a fantastic project to complete while the country has been in lockdown and we are looking towards musicians at home to be creative.’

What our judges said about Alex’s entry:

To find out more about Alex:
Instagram Link @alexwallace.music