Walter Hussey was a priest who had his first parish at St Matthews in Northampton, and as they were about to celebrate their 50th anniversary he thought it would be a good idea to have a new piece of music for the occasion. So he wrote to one or two composers with this idea in mind, and the result was Benjamin Britten’s Rejoice in the Lamb. Not a bad start. Having got the bug he went on to commission many other pieces by up and coming composers including Gerald Finzi, Michael Tippett, Edmund Rubbra, Lennox Berkeley and Malcolm Arnold. In 1955 he was appointed Dean of Chichester Cathedral and he continued to commission choral works including settings of the Canticles by Herbert Howells and William Walton. He also somehow managed to persuade Leonard Bernstein, who had recently composed West Side Story, to write a piece which became known as the Chichester Psalms. 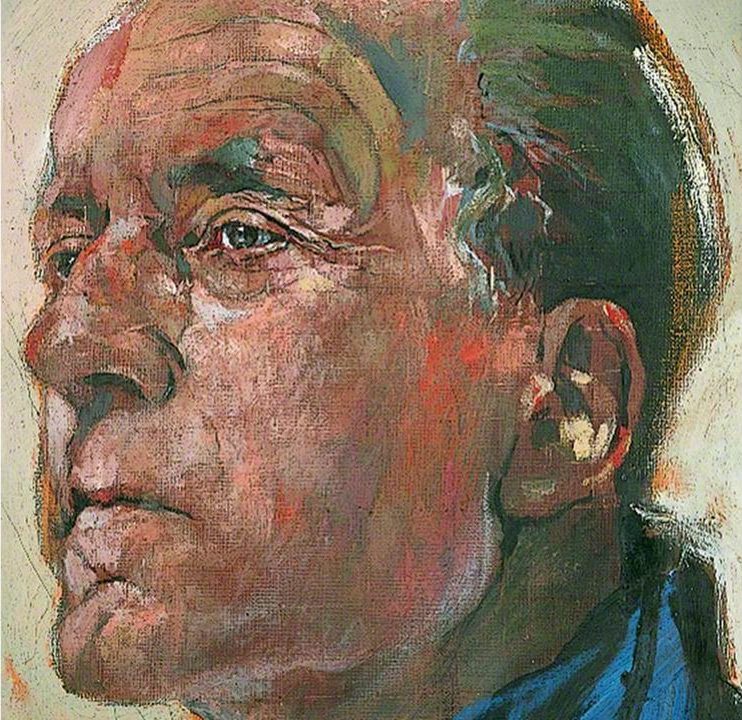 Painting of Walter Hussey by Graham Sutherland where very unusually he is not wearing glasses.

It was at Chichester where the family of one of Reading Phoenix Choir’s members, Howard Jenner, met Walter Hussey. Both Howard and his elder brother Anthony were choristers at Chichester Cathedral in the 1960s, and one of their most striking memories was of a newly commissioned piece by Bryan Kelly. If you listen to his Magnificat in C today it still sounds fresh and exciting. 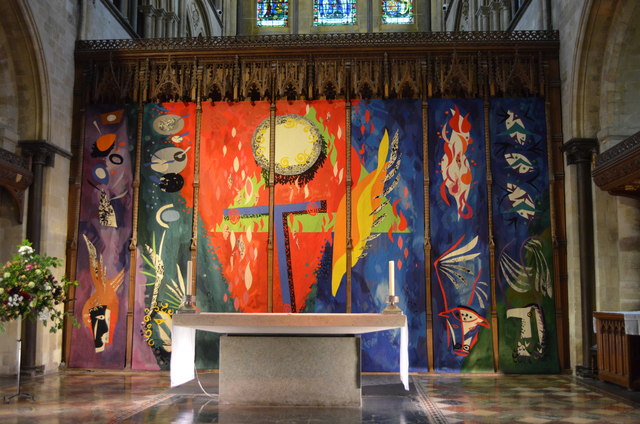 Walter Hussey believed that not only was there an important duty to foster the continuation of our choral tradition, but also that composers should be paid for what they do as they need to make a living just the same as anyone else. It should be noted that it wasn’t just new music that Walter Hussey promoted. He was also involved in commissioning works of art from such distinguished artists as Henry Moore, Graham Sutherland, John Piper and Marc Chagall.

Inspired by the memory of the work of Walter Hussey, the idea for a composition competition evolved. Reading Phoenix Choir have commissioned a number of works over their 50 year history, and in 2016 were involved in the premiere of a new joint project between Bob Chilcott and Age UK in Oxfordshire, so the opportunity to create their own composition competition was too good to pass up.

And so the Walter Hussey Composition Competition was born.

Established in 1969, Reading Phoenix prides itself on being one of the finest amateur choirs in the UK. Their aim is to deliver the highest possible standards of performance over a wide range of repertoire, introduced in a friendly and approachable style. One of the most remarkable qualities of this 50-strong mixed voice choir is that every member sings entirely from memory. In addition, the choir does not sing in the traditional arrangement of soprano, alto, tenor and bass sections, but in mixed formation. This enables the singers to fully engage with the other voice parts, creating a great aural blend.

Performance is the lifeblood of the group and, for 50 years, the choir has given up to 20 concerts a year at a range of beautiful churches and concert halls. During this time, they have always aimed to produce musical artistry of the highest calibre, as well as raising over £300,000 in support of various charities. 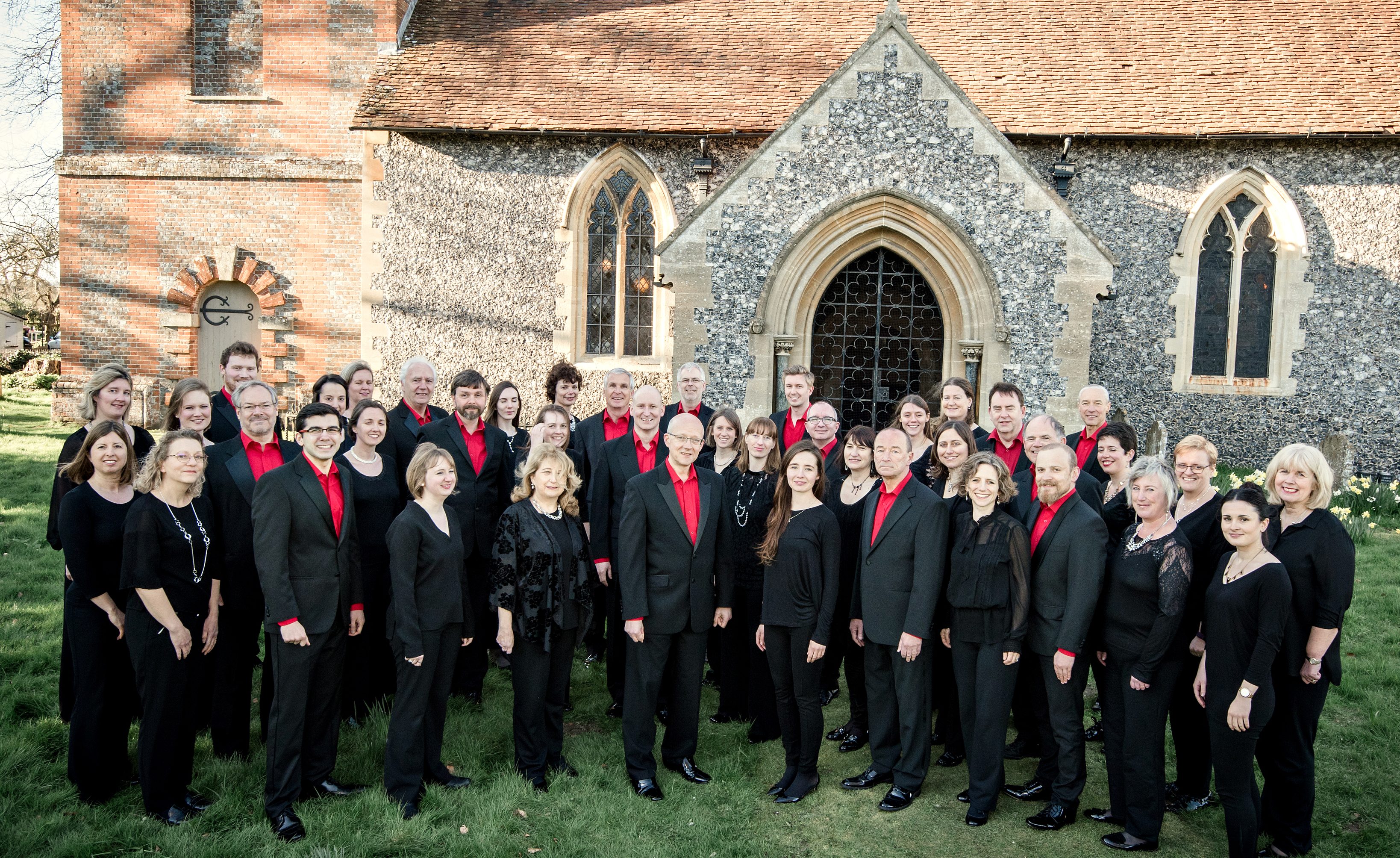 The choir’s repertoire is varied and exciting. They enjoy exploring the whole range of a cappella music – early and contemporary, sacred and secular, serious and light – and have given more than 20 first performances of specially commissioned pieces. A typical concert might start with early music by Bach, Palestrina and Rachmaninov, before moving through the centuries to include spirituals and folk songs, and finishing off with a selection of jazz and pop pieces. There is always something for everyone! As well as a busy concert schedule, the choir participates in national and international competitions, records its own CDs, tours the UK and beyond, and runs workshops with local schools to get young people excited and passionate about music.
Over the years, the choir has frequently appeared on radio and television and in May 2015 represented England at the Cork International Choral Festival. The choir have also been successful across a wide variety of choral competitions including Llangollen International Eisteddfod and have reached the final of the BBC Choir of the Year on several occasions.

In 2007, the choir were lucky enough to sing at the Royal Albert Hall after winning the British Heart Foundation Scratch Choral Challenge, and in November 2016 they made their fourth appearance at the Brandenburg Choral Festival in London.

Previous tours abroad have included America, Russia and many countries across Europe. On previous trips the choir have sung mass at Notre Dame Cathedral and received a standing ovation at Voronezh Opera House. Over the years, many choir exchanges have been undertaken including with choirs from Voronezh, Matera in Italy, the Dvorak Choir from the Czech Republic and choirs from Sacramento and Helsinki.

In 2018 the choir embarked on its first concert tour of northern Spain, and in 2019 they toured Herefordshire including a concert in Hereford Cathedral where Golden Day by Gerson Batista and Gold Leaves by Ethan McGrath, both pieces from the 2018 Walter Hussey Composition Competition were performed.