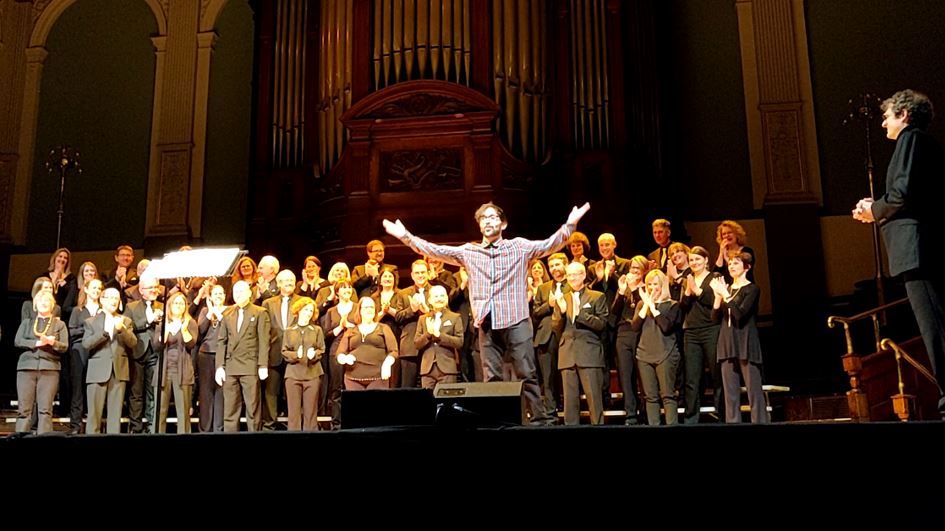 Gerson was thrilled to win the inaugural competition and had travelled all the way from his home in Aveiro, Portugal to receive the award. He praised Reading Phoenix Choir for this first performance of the piece:

‘I was really overwhelmed by the amazing quality and professionalism of the choir. It was an epic day surrounded by incredible singers and people! It all felt like home!’

After the performance of his piece, visibly emotional and happy, the composer returned to the stage to acknowledge the applause of the audience and the choir.

The winning piece was decided by an international panel of judges and fulfilled the critical requirements of the competition which was to help Reading Phoenix Choir celebrate its 50th anniversary as well as being particularly inventive in its vocal treatment.

Choir members thoroughly enjoyed the distinctive and different style of singing required to perform Golden Day and had an added bonus when the composer himself attended the final rehearsal on the Thursday before the concert.

Furthermore, Reading Phoenix Choir are delighted to have added another two entries to the Walter Hussey Composition Competition to their repertoire. Gold Leaves, written by Ethan McGrath, is opposite in style to the winning piece, but nonetheless very beautiful, and was performed as an encore at the end of the concert. It is likely to continue in this role for some time to come. The third piece, Gold and Spices composed by Alison Willis, will receive its world premiere performance at the choir’s annual carol concert on Saturday 14th December 2019 at Reading Minster.

The high standard of this years’ competition entries, and huge interest in when the next competition will start, indicates that the inaugural Walter Hussey Composition Competition has been a tremendous success. We eagerly anticipate what future competitions will bring.

Gerson Batista is a multi-award winning young composer, illustrator, multi-instrumentalist, poet and writer from Aveiro, Portugal. He started his academic path in civil engineering but early on he began composing. In 2007 he enrolled to study music theory, church organ and vocal techniques at the Calouste Gulbenkinan Music Conservatory of Aveiro. He also studied composition with Pedro Bento, Adelina Tavares, Ricardo Ribeiro and Virgílio Melo.

Gerson’s first solo album, Silent Dreams, was released in 2012 whilst composing contemporary music and premiering some of his early contemporary pieces. Since then, Gerson has written and presented theater and poetry pieces, published two books, and composed and produced across a broad range of musical genres.

He is currently residing in Aveiro, where he is developing and creating several projects within contemporary music, folk, jazz, writing and illustrating. Find out more at www.gersonbatista.com